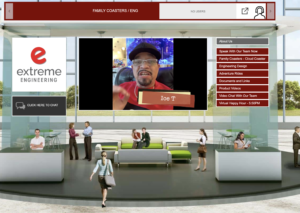 IAAPA Awards Extreme Engineering for Best Video during the virtual expo.  The industry’s very first Virtual Expo was live during China Standard Time, July 28th through July 30th.  Over 130 global exhibitors participated on the virtual platform, showcasing their products and services.  This was IAAPA’s very first attempt with a virtual platform.  The virtual show was created in response to IAAPA’s postponed IAAPA Asia Expo in Macau that was supposed to happen June of this year.  “The virtual platform wasn’t perfect, but it was better than no doing anything at all.  I was happy IAAPA had the pioneering spirt to try something new in hopes to support its members,” states Phil Wilson, Executive Vice President with Extreme Engineering.

During the 3 day event, 21 speakers from around the world hosted sessions on important topics such as safety, operations, digitalization and more.  IAAPA’s virtual expo had thousands of registered attendees, all of which had the opportunity to participate in IAAPA’s very first virtual expo awards.  At this year’s virtual expo IAAPA had three major awards categories.  These categories where:  Best Booth Video, Best Booth Downloads and Most Booth Engaging Chat Room.  Extreme Engineering was awarded the very first virtual award for Best Booth Video.

Famous West Coast rapper, Ice-T, was Extreme Engineering’s ambassador during expo.  Ice-T gave a shout out on Extreme Engineering’s engineering services at their virtual booth.  You can watch the video that won the IAAPA Expo award by CLICKING HERE.  “We are excited to win another first award of its kind by IAAPA.  This makes it our 15th industry award.  Our team is very excited and thankful for the recognition,” says Pete Barto, Vice President of Sales and Strategic Partnerships.

We had a lot of fun with the videos during virtual expo week.  For instance, after hours we changed the video to ‘Jib Jab’ content.  It was a fun way to get people to come back to our virtual booth for after hour laughs,” says Phil Wilson.  With IAAPA’s virtual expo finished, it will be interesting to see what today’s climate will recreate in the near future.  Virtual shows are a growing trend, especially with the current pandemic.  IAAPA will continue pioneering towards new outlets that can benefit their global members.  Extreme Engineering obviously looks forward to participating in a real trade show, seeing their industry partners, friends and clients in person.  For now, virtual spaces have helped facilitate a platform to gather together and support one another.

With over 25 years in experience, Extreme Engineering has been globally recognized as the primary supplier in family coasters, engineering design and adventure rides.  With thrill rides such as the Cloud Coaster roller coaster, High-Action Adventure parks and Fly Wire ziplines, Extreme Engineering now holds 15 industry awards, with its recent TEA Award on the Dollywood Tree of Life Project.

For more information on Extreme Engineering: